I think when you travel in a country where you don’t speak the language you kind of accept that you’re probably going to eat a few strange things along the way. In China the language barrier meant that I’d already sampled some weird and wonderful things due to the fact that I had no idea what I was being offered at the time. I’d already been a bit traumatised that I ate donkey – although it actually tasted good, memories of my childhood imaginary donkey La La (yes, I was a very imaginative child) sprung to mind – and being served up bowls of fat with Jenny and Anna (both vegetarians) didn’t really go down well either. But I was not looking forward to the challenge set by my friend Tony to eat some bugs.

Now I’ve seen "I’m A Celebrity" and I am not a fan of eating things which look like they should be crushed immediately underfoot (or at least caught in a glass and chucked outside). So this was one that I’d been putting off. Unfortunately it was getting close to the end of my trip and I knew it needed to be done.

Luckily I met a guy in my hostel who was also keen to give it a go so we visited Kaifeng’s Night Market. As I mentioned in my last post, Kaifeng is not exactly what you’d call touristy so the thing I loved about its market is that it was full of locals selling and buying strange produce.

It didn’t take long to find a stall selling bugs and, to the amusement of a crowd of onlookers we decided to go for some maggots and some unidentifiable larger creatures. Once again our request got lost in translation as we tried to ask the woman for a “small” portion – miming small with our hands. Depite agreeing she then brought two huge plates of bugs to our table.

Having attracted the attention of everyone around us we had no choice but to go for it. We started off with the maggots, which looked deep fried so I was hoping would just taste a bit crispy. Actually they tasted of fish and were slightly stomach turning. It did not bode well for the big bugs.

I think the saying “A picture is worth a thousand words” rings particularly true here, so I’m not going to try and explain it. But here’s me trying one of said big bugs:

Actually, despite being much more meaty that I'd expected, the bigger bugs were better than the maggots and we actually ended up eating quite a few. Still, probably not something I'd choose to eat as a treat (which is how they're eaten in China). Personally this is more my idea of a treat: 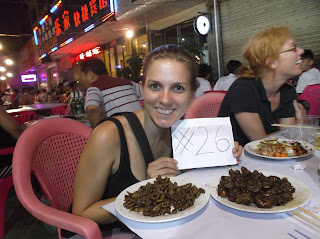 Journo Em
Journo who gave it all up for a life on the road. Doing 30 things I've always wanted to do before I turn 30.